Sign up now for our free weekly email updates.  We’ll give you the good news from our community.
Urban Views
Camp Diva Girls For A Change host annual...
High School and College students from across Virginia...
Election 2020: Number of Black Women Congressional Candidates...
Virginia Sales Tax Holiday is This Weekend
Summer Home & Garden
Home View On... The Passionate Curiosity of Leland Melvin
View On...

The Passionate Curiosity of Leland Melvin 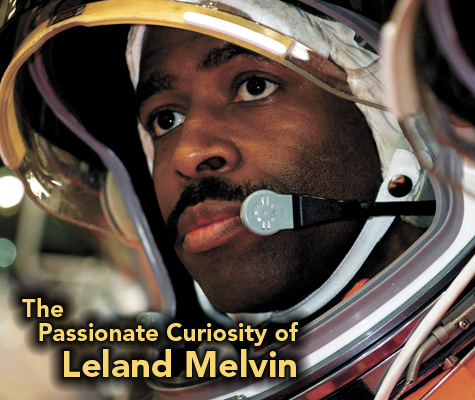 When the pressure’s on, Leland Melvin directs fate with a steady hand.

As a wide receiver with Heritage High School in Lynchburg, he won a scholarship to University of Richmond not for a crowd-rousing reception, but for his dramatic comeback after an embarrassing fumble.

After being sent home from training camp with the Dallas Cowboys due to a torn hamstring, and again as a draftee with the Detroit Lions when the injury recurred, he regrouped, and earned a Master’s degree from University of Virginia.

By the time he was in his early 30’s, his list of life accomplishments was already impressive.  Although injury had snatched the prestige of a pro football career from his grasp, he was thriving as a fiber optics researcher at NASA. One day a friend suggested he’d be perfect for the astronaut program. Leland shrugged off the idea. He’d never thought about a career as an astronaut.

But it didn’t take long for his friend’s tales to stir his curiosity. He applied, and became the first ever pro athlete-turned-NASA astronaut, as well as one of six African Americans on the astronaut corps. Last February, he travelled 5.3 million miles and circled the earth 202 times on Space Shuttle Atlantis.

Yet ask Leland Melvin to name his most far-reaching accomplishment and he’ll remind you that it’s something each of us can achieve: to serve as a role model to a child.

Leland Melvin is addressing a packed theatre of middle school students at the Science Museum of Virginia. With a resume this deep, and a persona this approachable, he could talk to them about anything; hurtling 17 thousand miles an hour through space, composing music at his piano, snowboarding…

On this Friday afternoon, as he strides the stage in a royal blue NASA suit, Leland Melvin is thinking about the Nintendo Wii, “I haven’t played it yet, but I want to,” he says. “It looks pretty cool.”

He may be talking video games, but make no mistake. Melvin, a robotics specialist with NASA, is addressing science.  Last February, the man who admits, “I played pong as a kid,” controlled a 58-foot robotic arm that installed an integral part of the Columbus laboratory on the International Space Station. He gives some credit to the mastery of video games. “If you can play your games pretty well,” he tells students, “you can attach a multi-million dollar element to the International Space Station.”

The giant screen in the Museum’s IMAX Theatre shows video footage of Leland controlling the arm.  Inside the Shuttle, he’s only able to judge its movements by watching through a tiny window. Any slip could be fatal to the team.

But in the delicate process, Melvin’s academic achievement meets skills honed on the football field and with video games. In the video, his eyes betray no evidence of stress, just his firm belief in the importance of discovery.

He turns from the screen to face the students and gestures passionately. “Once we stop exploring as a civilization, our civilization will falter. That’s why it’s so important that you guys work hard, study hard.  If you believe in yourself, you can do anything you put your mind to. Any dreams that you have, you can live them.”

The giant screen switches to footage of the earth below Shuttle Atlantis. “Look how blue that water is,” Leland says. “From space you can see some of the most amazing colors.”

Melvin earned a degree in Chemistry from University of Richmond in 1986. But his fascination for chemistry began in childhood, when his parents, Grace and Deems, gave him a chemistry set. It captured his imagination. “It was this potassium permanganate. I’ll never forget the deepness and richness of that purple. It was almost like it was unreal — three dimensional color, if you can have that. And I guess that moment when I saw that, to go from clear to that color, it triggered something in me.”

Not long after, he discovered another passion; photography. He quickly combined his interests and began to develop his own prints. “I would take pictures during the day and develop them at night. To have this final product that you could then have for all posterity. It amazed me, just capturing a moment. To take this blank sheet of paper and to turn it into something beautiful or stunning, [was like] creating colors with the chemistry set.”

The home that Leland shared with his sister Cathy nurtured his diverse interests.  Both his mother and father were teachers in Lynchburg schools. But what he learned about science and math nearly pales compared to what he learned about serving community. Even after moving to Houston, Texas to work at Johnson Space Center, Leland says, “I would go back to my hometown, and there would be people seeking me out to tell me how my parents, or my father either saved their life, kept them off of drugs, or just helped them out immensely to the point where they’re now they’re married with kids and a spouse. When I see that kind of change, it’s just so important. The more you give, the more you get. It might not be financial, but it might be part of seeing someone change their life. You never know who’s listening, and you never know what impact you’re going to make.”

“A Hero’s a Sandwich”

Melvin encourages others to get involved and his personal outreach is inspiring. He regularly works on behalf of children and vulnerable communities. Some favorite organizations include Reach for the Stars, an educational program founded by his friends Phillip and Angela Scott of Chesterfield.

He’s active with Project Row Houses (www.ProjectRowHouses.org), an innovative organization based in New Orleans that uses creative development to both rebuild the Third Ward, and promote African American art and culture. He continues to speak to children at any opportunity.

Yet he rejects any notion that he’s especially deserving of praise. “Today, there are people say, ‘Oh, you’re a hero.’ I say, No, no one’s a hero. A hero’s a sandwich. You’re either a good role model, or you’re a bad model. It’s what you do with what you’ve been given, with what you’ve been blessed with after that to help others, I think, that makes someone a good role model.”

It’s late afternoon and Leland Melvin is thinking about Jefferson.

Not the statesman, but room service in the venerable hotel on Franklin Street where he’s staying. “I had a great meal last night, and I’m still thinking about it,” he says with a smile.  Although he’s based in Houston, Texas, Leland regularly visits Richmond.

“This is my home,” he says, before adding, “Well, it’s my second home. I get back to Lynchburg also.” When he goes out for dinner in Richmond, he looks for “Anything. Indian, Chinese. I love food. Everything from the very nice restaurants to the very bottom brow, it’s all good.”

Leland has plenty of interests to vie for his free time. He enjoys hiking, walking his Rhodesian ridgebacks Jake and Scout, camping and swimming. “Not so much football anymore,” he laughs.

And at 43, Leland maintains the enthusiasm for photography he first felt at age ten. His personal Website, www.LelandMelvin.com, features his striking images.

“I like to eat, I like to cook, I like to just explore. I have a van that I go camping in with my dogs, and I named the van “Curious,” and I have a Curious George leading the way. Part of living is exploration; exploring new things, new people. Even though we are a hodgepodge of different cultures, and religions, and races, we’re all in this together on this planet.”

Dress for Success Styles the Next Wave of...

Personal Injuries: Getting payment for Pain and Suffering

I LOVE YOU BECAUSE…

So sweet Shelby also loves to lie underneath the ceffoe table John and I call it her den . We have an awesome no-leash trail that runs through the woods behind our apartment, and I take Shelby out on the 45 minute loop about 5 times a week in addition to shorter walks throughout the day. She’s getting older (7) but still needs a good amount of exercise! I’ve attempted to take her out on jogs, but she tries to sprint for the first half mile, and ends up lagging behind me near the end. No one every told her that slow and steady wins the race .