According to the Center for Disease Control, heart disease remains the number one killer of both men and women in the United States. Every year, over 600,000 men and women die from heart disease-related illness—that’s one in four deaths. As harrowing the statistics, it’s critical that we take action to ensure data doesn’t become our destiny. We must live intentionally, adopting lifestyles that help us work towards the ultimate goal of a long, healthy life. We don’t have to be the one in four. 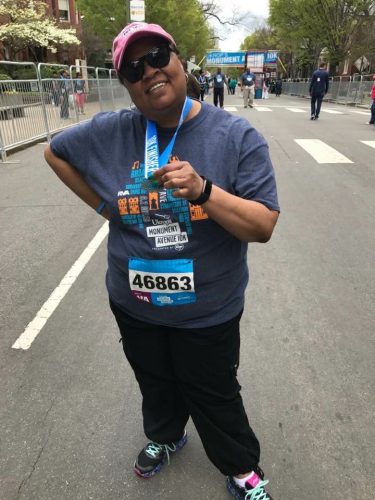 Glenda after the 10K

Richmond’s own Glenda Baul learned first-hand that in order to fight the statistics, a lifestyle consisting of clean eating and exercise simply isn’t enough. Those things are critical, yes, but it’s also about learning your family’s medical history and understanding which diseases may be hereditary. That education makes you better prepared than ever to fight diseases before any serious symptoms manifest.

Baul learned this lesson at age 58 when unusual fatigue set in after what was otherwise a routine workout. At her job at Dominion Energy, Baul was a part of the winning team for the 8-week Wellness Challenge, and in her personal life, she enjoyed regular workouts, including Zumba and water aerobics. She was certainly no stranger to physical activity, so why she suddenly fell short of breath one day after walking up just five steps was a mystery. The gym’s trainer noticed this unusual drop in energy, and also noticed that where she’d usually walk on a 15.0 incline on the treadmill, she could only reach level 2.0.

“My team had just won first place,” Baul recalls. “The challenge was to get fruits and veggies into our diet each day, drink water, and document it for eight weeks. We walked up ten flights of stairs and did our own exercises, and I kept it up after the challenge was over. So when I felt tired and winded after just five steps, I knew something wasn’t right.”

The trainer suggested she see a doctor, and when she learned it’d be a month before getting an appointment, Baul headed for the Emergency Room.

She’s always remained aware of her family’s history with heart disease. Her father passed from heart attack, her mother suffered a heart attack, and her 66-year-old brother had three heart attacks, has six stints, and uses a defibrillator. Even still, she didn’t consider that she may also be at risk.

“When I went to the Emergency Room they couldn’t find anything, so the cardiologist assured me that my case wasn’t urgent,” Baul says. “After the second stress test, I moved from cardiology and went to see a pulmonologist, who didn’t see anything either.”

Eventually, the cardiologist called Baul with astounding news: her stress test was abnormal, and one of her arteries was 95% blocked.

Baul vividly remembers the doctors next words. “Ahh, there it is. You’re joining the ranks of your family and getting a stint.”

After receiving the stint, she went through cardiac rehab and faced no other heart issues moving forward.

“It was all genetics,” she said matter-of-factly. “It was hereditary, but as the doctor pointed out, it wasn’t just heart disease that had affected my parents; it was my brother, too. Heart disease was now on my level.”

Despite having her own personal encounter with heart-related illness, Baul has continued on living the active life she’s always been proud to lead. After cardiac rehab, you’re trained to take it easy, which was a bit difficult for her at first. After all, she had no actual damage to her heart like those close to her. Her doctors had to remind her that a stint is still a form of surgery, so she’d have to be patient as she works to rebuild her muscle strength and endurance. Today, almost four years later, she’s back in action, and has even added weights, core, and PiYo to her workout routine.

“I can keep up with the girls half my age,” she laughs proudly.

Though Baul already had a position as a volunteer through the American Heart Association, her role has evolved into a heart health ambassador of sorts. She shares her story to men and women throughout Virginia, stressing the importance of knowing your family history and listening to your body in order to achieve optimal health.

“Know your ABCs,” she advises. “Know your A1C, blood pressure, and cholesterol levels. Understand your family history and what diseases run in your family.”

What makes Baul’s story so dynamic is that her experience wasn’t that of a traditional heart attack and recovery. No, she didn’t experience a heart attack at all, but she still faced severe risk. Despite every effort she made to live a healthy lifestyle, her family history is what determined her ultimate outcome, and it could be what determines yours, too.

She welcomes public speaking opportunities where she may tell her story and inspire action before it’s too late. Her story and message have been printed in Richmond Magazine and Dominion Energy, and she’s done a commercial through Go Red for Women, encouraging others to take control of their health. Her message is heard at churches far and wide; her advocacy has indeed become ministry. Later this month, she’ll speak at a local church as a Black History Month honoree, sharing her cautionary tale and inspiring others to be courageous in the face of adversity.

Wherever she goes, her involvement with the American Heart Association is there. Whether it’s at church or in print, Glenda Baul has dedicated her own life to changing—and saving!—the lives of others.