The Privilege of Being Barbara Bush 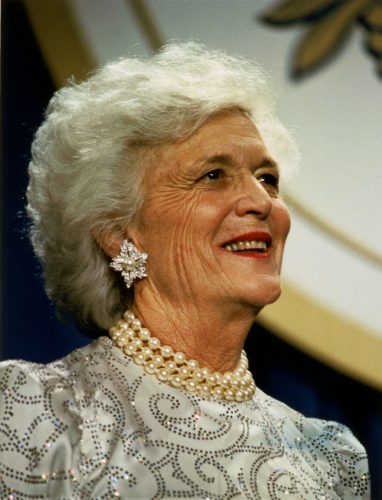 Watching the several days’ media coverage of the life of Barbara Bush after her death last week, brought up memories of decades ago during the first Bush Presidency when Barbara Bush was the First Lady of the United States. The Barbara Bush of those days was not entirely the Barbara Bush I heard speakers and pundits revering throughout the media coverage last week. Although it is easy to fall into a nostalgic revision of history when someone is being remembered in death, it isn’t easy to forget some of the things that, at moments, make those characterizations hard to incorporate into the historic dissonance they engender. It is difficult not to blur the lines of the political and the personal when an individual of position and privilege intentionally inserts themselves into the realm of politics. So is the case of Barbara Bush who never avoided the spotlight of politics as First Lady, First Mom and a “favorite “ on the campaign trail.

Memories of Barbara Bush within the Black community include the disaster that was Hurricane Katrina when Mrs. Bush spoke to the so-called “refugee crisis” in New Orleans. She was interviewed and on camera remarked, regarding the Hurricane Katrina “refugees” being housed in the Astrodome, “They’re underprivileged anyway, so this is working very well for them.” Her benevolent savior approach to this crisis and her subsequent remarks were not only entrenched in the historic amnesia of white privilege but the comments were on their face ensconced within a white supremacist frame. And least it be forgotten, the people “housed” in the Astrodome were American citizens NOT refugees! They were Black Americans! History does repeat itself. Because the residents of Puerto Rico today who are also American citizens have also been neglected and ignored by the United States government as if they too are refugees. It was clear in 2005 when Mrs. Bush spoke of the Hurricane Katrina victims that the value given to some Americans was quantitatively different than that given to others. In the years after Katrina there was never any effort made to rectify the mischaracterization of the Americans who were not only victimized and traumatized by this natural disaster but re-victimized by a government that clearly treated them as lesser citizens and a former First Lady who underscored the disparity of treatment by her insensitivity and privileged position.

Barbara Bush was clearly a wonderful wife, mother, grandmother and great-grandmother. She was revered and loved by family and many friends and dignitaries worldwide. She was the family matriarch. She was, however, not loved more or revered more than many other matriarchs within our communities. She gave no more to her family than many other matriarchs have given to theirs, but she had the privilege to serve as First Lady of the nation so her remembrances are elevated to national prominence and her legacy can be selectively edited. But as my beautiful, giving and magnificent grandmother always told me, “To whom much is given much is required.” Others will remember Barbara Bush in one way and some in a very different way.

What will be your fundraising legacy?