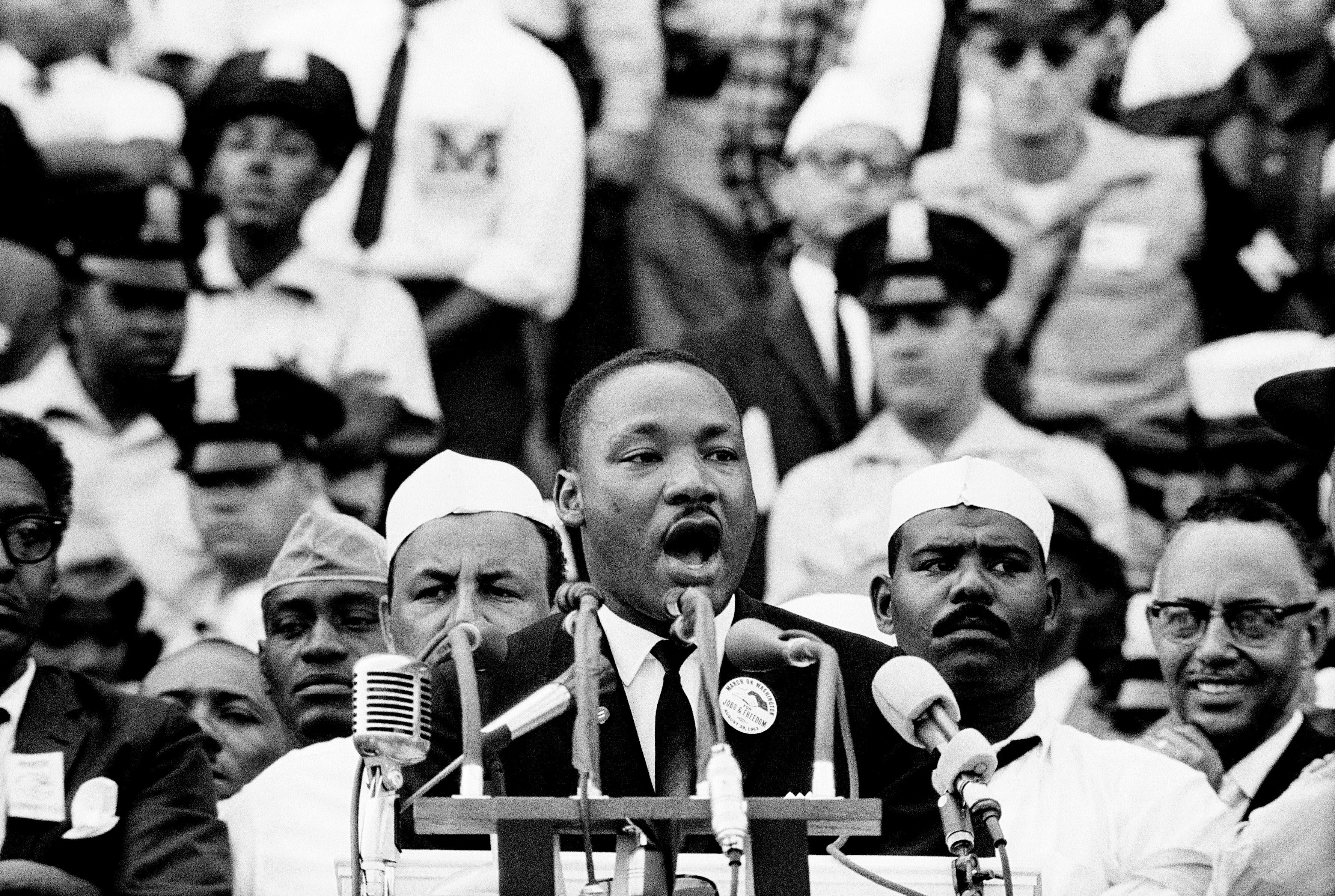 Dr. Martin Luther King, Jr. delivers his famous “I Have a Dream” speech in front of the Lincoln Memorial during the Freedom March on Washington in 1963.

The Rev. Martin Luther King Jr.’s words continue to inspire more than 50 years after his death. Here are some notable quotes from King from The King Center.

“I know this whole experience is very difficult for you to adjust to, especially in your condition of pregnancy, but as I said to you yesterday this is the cross that we must bear for the freedom of our people.”

— letter from King to Coretta Scott King from prison in Reidsville, Georgia, Oct. 1, 1960

“Your courageous action today reveals not only your commitment to a campaign promise but also to the principles of justice and freedom so basic to our democratic heritage.”

— telegram from King to President John F. Kennedy upon the Nov. 20, 1962, issuance of Executive Order 11063, which mandated an end to housing discrimination.

“We are caught in an inescapable network of mutuality, tied in a single garment of destiny. Whatever affects one directly, affects all indirectly.”

“God never intended for one group of people to live in superfluous inordinate wealth, while others live in abject deadening poverty.”

“With this faith we will be able to transform the jangling discords of our nation into a beautiful symphony of brotherhood.”

“This tortuous road which has led from Montgomery, Alabama, to Oslo bears witness to this truth. This is a road over which millions of Negroes are traveling to find a new sense of dignity. This same road has opened for all Americans a new era of progress and hope. It has led to a new civil rights bill, and it will, I am convinced, be widened and lengthened into a super highway of justice as Negro and white men in increasing numbers create alliances to overcome their common problems.”

“Without hard work, time itself becomes an ally of the primitive forces of social stagnation. So we must help time and realize that the time is always ripe to do right.”

“What, then, can I say to the Vietcong, or to Castro, or to Mao as a faithful minister to Jesus Christ? Can I threaten them with death, or must I not share with them my life?”

“All men are brothers because they are children of a common father.” 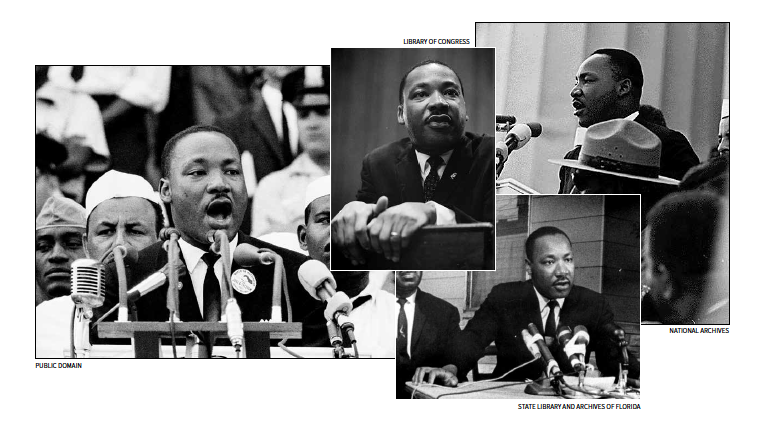 Civil rights is a complicated issue for even grown-ups to work out and Martin Luther King Jr. Day is more than just a day off school. Here are some activities you and your family can do together to help children understand King and the civil rights movement.

Hit the local library and help your child find some age-appropriate books about King and his message. Let them look up and listen to or watch parts of the “I Have A Dream” speech.

Make Your Own Book

Watch or listen to some of King’s speeches and have children create their own picture books about what freedom means. Get as crafty as you like with what you have on hand or go all out and make a family trip to the art supply store. For older kids, make a collage of words and phrases from King’s speeches.

Research your area and find sites that were once segregated or that otherwise preserve civil rights history and make a visit. Or, find a statue or place that honors King and his legacy. If you are lucky enough to visit the nation’s capital, you’ll find many historic sites and monuments related to King.

Visit Another Church or Religious Venue

King’s faith was a pillar of his work for nonviolent resistance to injustice. Visit a different house of worship to learn more about other religions and cultures. Share your thoughts and feelings about a different service with your kids and talk about how even though we are all unique, there are certain things, like faith, that can bring us together.

Kindness goes a long way toward acceptance. In honor of King, set aside time to do good works as a family. Volunteer at a homeless shelter, pick up trash at a city park, clean a playground. Work for a better world for all of us. 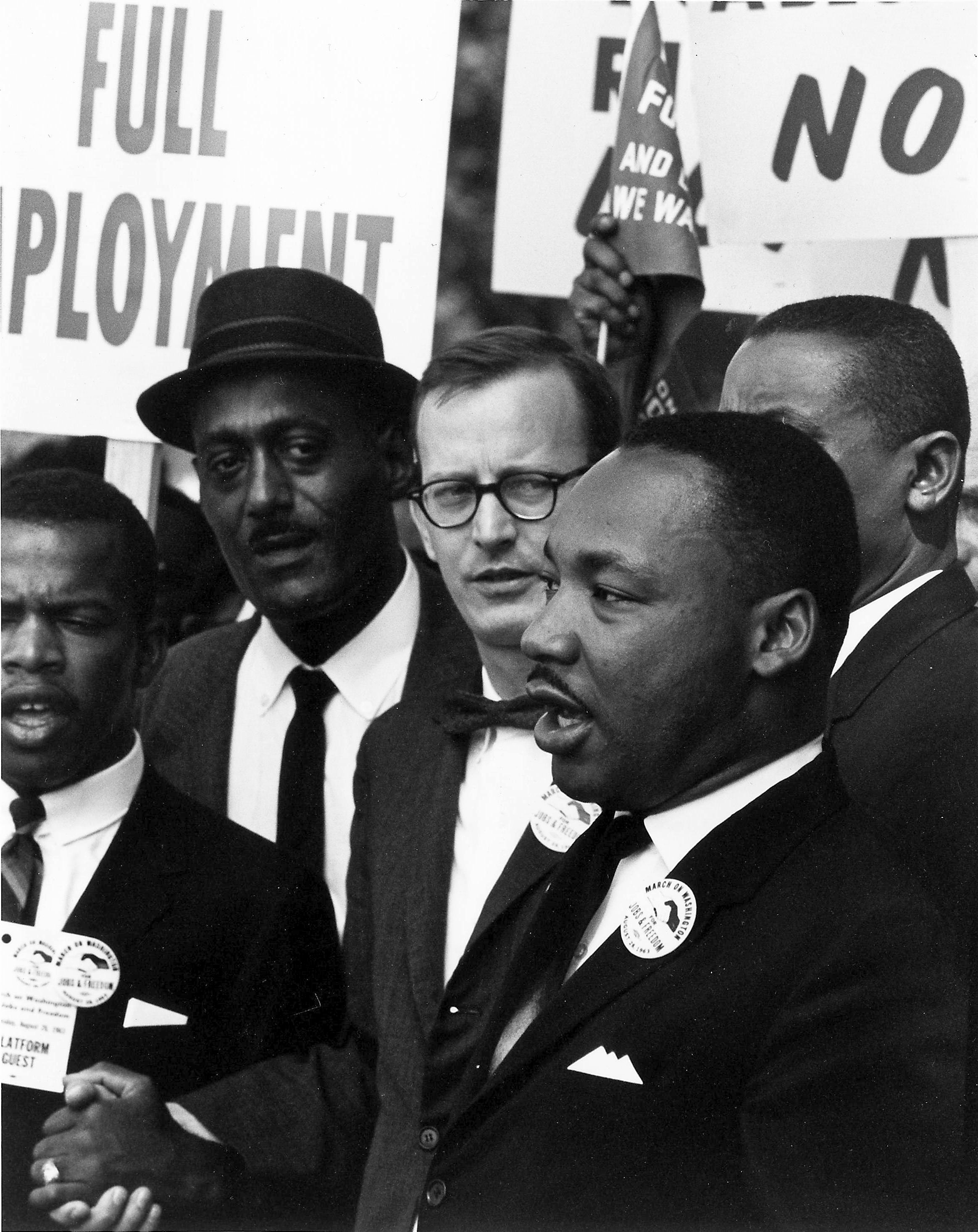 The Rev. Dr. Martin Luther King Jr. was a staunch believer that violence was not the way to resist injustice.

He and his supporters believed in transforming Christian love into powerful peaceful change through grassroots organizing and nonviolent protests such as marches and boycotts.

Agape is a term largely found in Christian belief that means a love that’s spontaneous, unmotivated, groundless and creative. The term is at the heart of King’s belief in a knowable God and that love and nonviolence could fix America’s racial problems, says the King Encyclopedia maintained by Stanford University’s The Martin Luther King Jr. Research and Education Institute.

“At the center of nonviolence stands the principle of love,” King said. “When we rise to love on the agape level, we love men not because we like them, not because their attitudes and ways appeal to us, but we love them because God loves them. Here we rise to the position of loving the person who does the evil deed while hating the deed that the person does.”

King was introduced to nonviolence when he read Henry David Thoreau’s “Essay on Civil Disobedience” as a freshman at Morehouse College. He was fascinated, he wrote, by the “idea of refusing to cooperate with an evil system.” During his education, King refined his ideas about nonviolent protest and social reform, but he didn’t put it into practice until the Montgomery bus boycott.

To King, nonviolence had six principles, according to the Stanford University encyclopedia. First, that evil can be resisted without violence. Second, that through nonviolence, the protester seeks to win the friendship and understanding of the opponent, not humiliate him. Thirdly, that evil, not the people perpetrating the evil, be opposed. Fourth, that people committed to nonviolence must be willing to suffer without retribution and suffering can be redemptive. Fifth, that nonviolence avoids both physical violence and the “internal violence of the spirit,” meaning the protester refuses to shoot his opponent but also refuses to hate him. Lastly, the protester must believe in the future and be convinced that the universe is on the side of justice.

How to create your strategic plan and fundraising plan