On March 26, 2019 University of Richmond hosted best-selling author, writer, and lecturer Lawrence Ross to discuss the history of campus racism as a part of his “Know Better, Do Better” college lecture series. Ross began the lecture series to discuss the topics surrounding his recently released book Blackballed: The Black and White Politics of Race on America’s Campuses. In this lecture, Ross dove into the long-standing history of racism within higher education and made parallels with the white supremacy that has plagued American society since the beginning of its inception 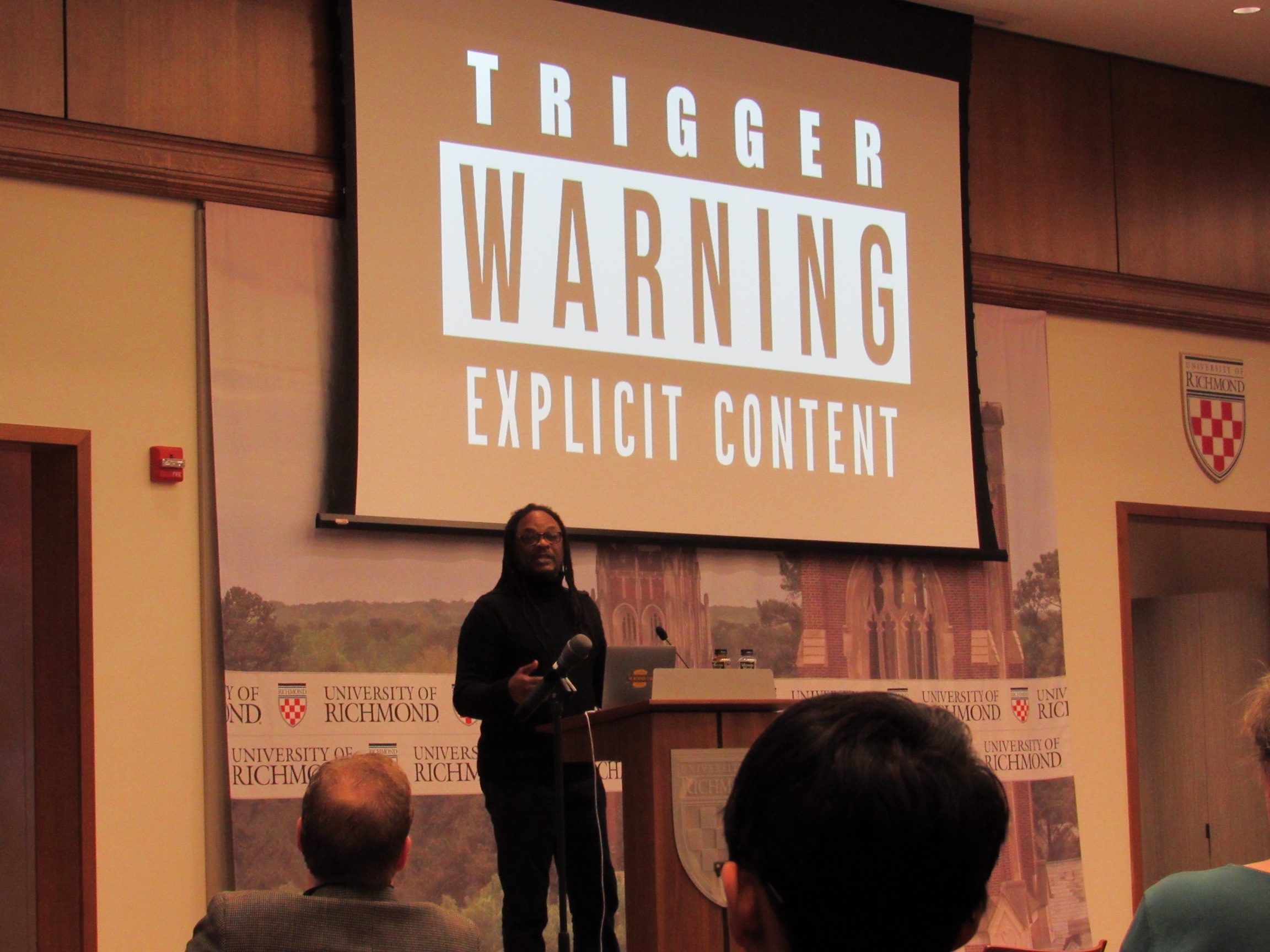 Ross dove into the media coverage of this event, and how the media looks at white students as “innocent”. “There is an idea that there is a natural innocence and there has to be an external force to cause the badness. They can’t just do a racist act; somewhere there has to be an influence to do something bad.”

For example, Ross explained how rapper Waka Flocka Flame canceled his scheduled concert at the University of Oklahoma after seeing the racist video. Talk show host, Joe Scarborough, from Morning Joe, then went to MSNBC to draw parallels between rap music and the frat’s racism. Even though the two factors had nothing to do with each other, Ross believed that members of the media were hopelessly reaching for a reason to take accountability away from the frat brothers.

Ross broke down the importance of race in today’s society and why he does not appreciate when people proclaim that they are, “colorblind”. “The fact that race is a biological nothing does not mean that it is not a sociological everything.”

As Ross’ lecture went on, Ross deconstructed the culture of America stating that the nation caters towards whiteness, just as it does to men. He made parallels to how women often have to endlessly worry about their safety, especially while walking back home at night. Men, on the other hand, don’t have to worry.

To show the white supremacy throughout American history, Ross pulled quotes from prominent figures within American history such as Thomas Jefferson and Abraham Lincoln. These quotes showed that they were clearly against racial equality. One of the quotes that he pulled was said by Abraham Lincoln during a debate he had with Senator Stephen Douglas, “…I will say in addition to this that there is a physical difference between the white and black races which I believe will forever forbid the two races from living together on terms of social and political equality. And inasmuch as they cannot so live, while they do remain together there must be a position of superior and inferior, and I as much as any other man is in favor of having the superior position assigned to the white race.” 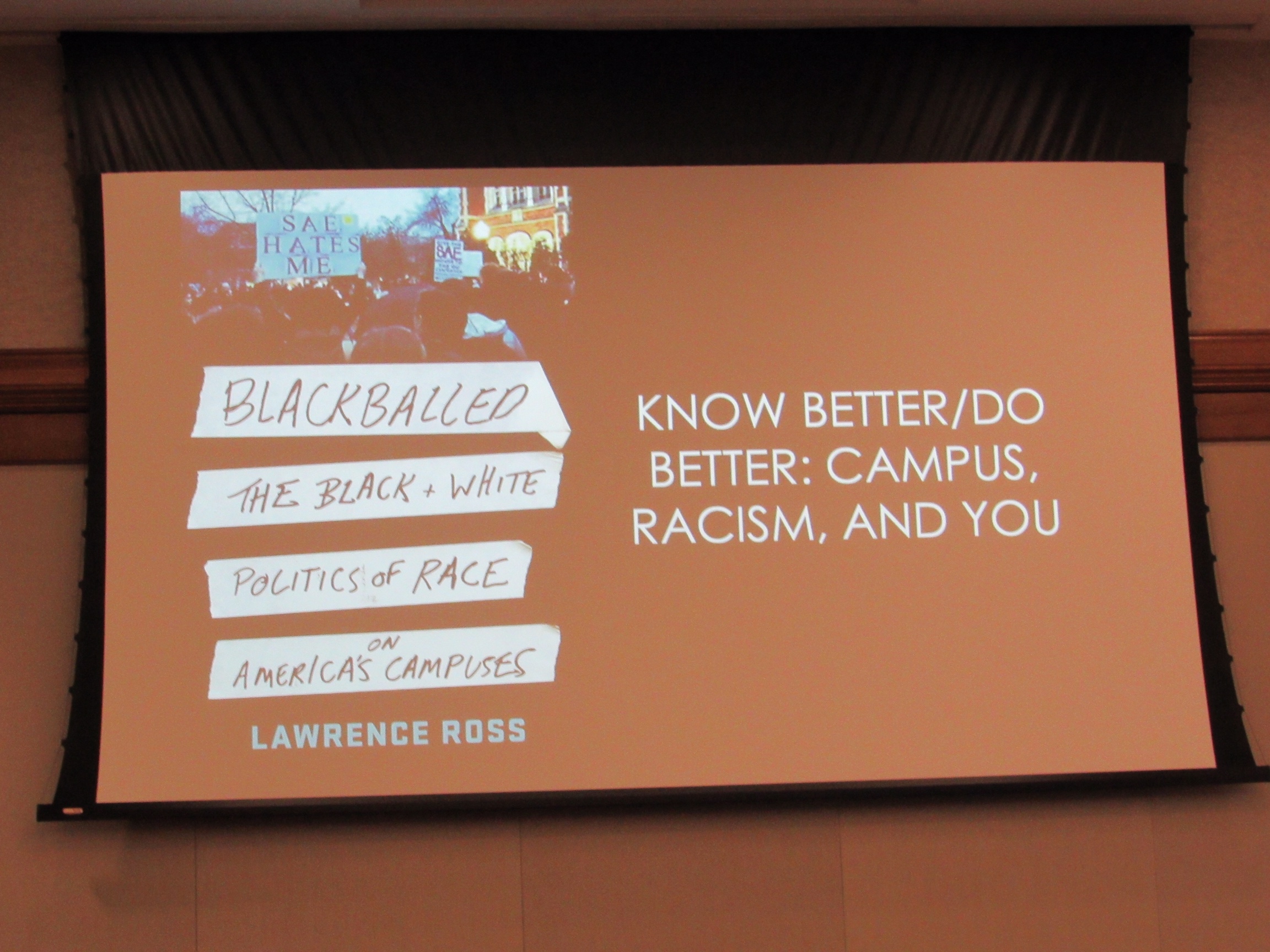 Throughout Ross’ lecture, he not only established a pattern of racism throughout the higher education system but also in the very foundation of the way that American history is taught.

To further his discussion surrounding the higher learning system, Ross broke down one of the main reasons why racists perform racist acts, to maintain dominance over another racial group. Ross began to pull countless examples from recent and past events showcasing a pattern of racism perpetuated by the university’s professors and other students. Dozens of Snapchat pictures, leaked text messages, emails, and social media posts were posted onto the screen showing that higher education’s racial divide is just as prevalent now as it ever was before.

Despite this prominent racial divide, Ross proclaimed that there is a disconnect between what’s happening to the student body and the higher ups of the university. Ross discussed four ways that race intermingled with higher education: segregation and anti-affirmative action laws, campus symbolism, sororities and fraternities, and racial microaggressions. To Ross, these four factors proclaimed the same message to students of color, “You don’t belong on campus.” 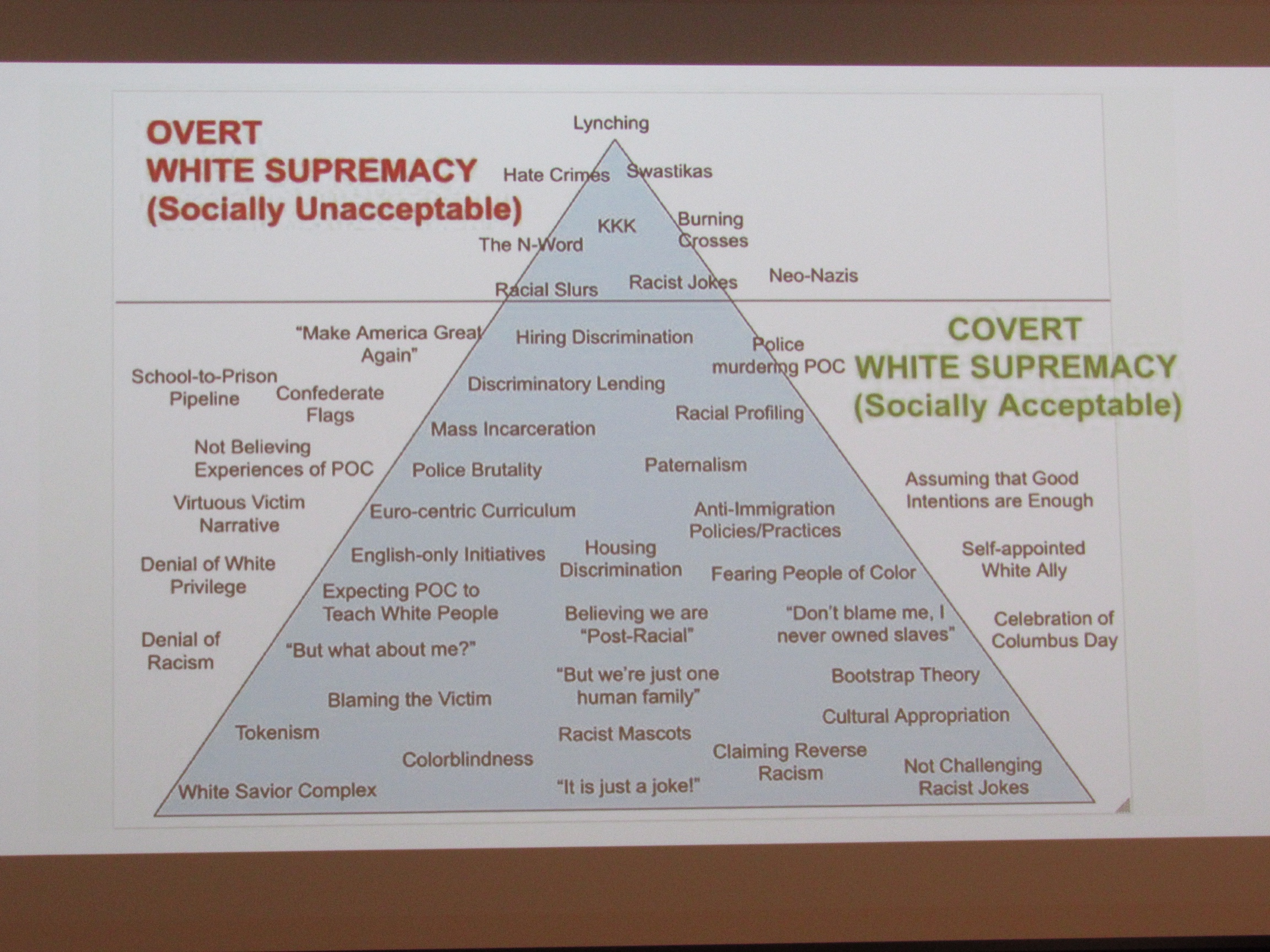 “Racists do racist things; I don’t really worry about them. The people I’m more afraid of are the non-racists. Non-racists typically think of themselves as being morally superior and rationalize what happens in terms of racism, and then they do nothing which allows racism to continue to foster.” Ross said.

During the lecture, Ross also discussed from many high-profile scandals including Ralph Northam’s recent blackface yearbook scandal and wealthy individuals like actresses Lori Loughlin and Felicity Huffman paying hundreds of thousands of dollars to get their children into high-profile universities. Ignorance plays a hand in it all, Ross says.

Ross pushes the crowd to be “anti-racist” instead of “non-racist”, “The people I want to stand beside me are anti-racists. Anti-racist means that you are a person of action. Sometimes you have to humble yourself and empathize with people who are different colors and ethnicities from you.”

As the lecture came to a close Ross began discussing a student that he met while lecturing that was shot and killed during the Waffle House shooting in Tennessee. “Racism is about dehumanizing, and ultimately taking away the life whether that’s psychologically, mentally, or physically, of people of color. It is not something that is a juvenile, “will grow out of it” type of deal.”

Ross ended the lecture with a call to action to the University of Richmond community, as well as the communities of other PWIs, “You have to work every day to figure out how to create a community on campus where people walk in feeling welcomed and have that same feeling when they graduate. When you do that, then the University of Richmond will actually reach its values and mandates and will produce the type of students and have the type of community that they all want in the first place.”