Sign up now for our free weekly email updates.  We’ll give you the good news from our community.
Urban Views
Virginia Sales Tax Holiday is This Weekend
CDC recommends opening schools this fall
Virginia Sales Tax Holiday is next weekend
Association for the Study of African American Life...
Let Us Heed the Words of Frederick Douglass...
Home Featured Sweetness of Black-led giving circles
FeaturedFUNdraising Good TimesMel and Pearl Shaw 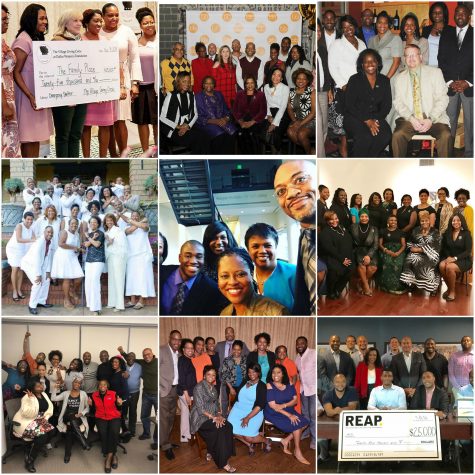 Three advocates for Black-led giving circles recently published an article that tells the story of these circles, placing them within the context of Black community and Black-led solutions. Akira Barclay, Valaida Fullwood and Tracey Webb call attention to the impact of these philanthropic groups, letting people know that “In a high-stakes era, where anti-Black racism is mounting and economic rifts are widening, philanthropy through participation in giving circles is attracting growing numbers of Black Americans.” Giving circles bring people together with a shared vision and purpose. They often have a local focus and are a clear demonstration of the strength and impact of Black dollars. Gifts and grants from Black-led donor circles can inspire those served by Black-led organizations. They create visibility for Black philanthropy and bring resources, advocates and role models to the organizations they support.

“For African-descent people, giving circles are an iteration of a giving model that has long been a part of Black communities and one that carries cultural resonance and historical significance. Collective kinship giving models, such as susu (or sou-sou), are a system of saving and distributing resources for the material welfare and spiritual wellbeing of each other found throughout the Caribbean with roots in West Africa.

“American history is awash with examples of how Black Americans have exercised collective giving to finance social resistance in serial struggles for liberation…During slavery, free Blacks would pool funds to purchase the freedom of the enslaved. Some groups formalized their giving and civic organizing by establishing mutual aid societies, such as the Free African Society, established in 1787… Giving circles affirm an African legacy. Circles represent a proven philanthropic vehicle with a 400-year track record and stand as a rising force for social change during a period of increasing racial hostilities, cultural erasure and divestment from Black communities.

Barclay, Fullwood, and Webb remind readers that while “community foundations and other mainstream philanthropic institutions struggle with issues of racial inclusion…Black-led and other identity-based giving circles pose a disruption to philanthropy’s structural barriers to social change.”

Take the time to read the full article and to find a way to participate in a Black-led giving circle in your community.

About the three authors: Akira Barclay,  is author of The Value of Giving Circles in the Evolution of Community Philanthropy and founder of Fresh Philanthropy. Valaida Fullwood is author of Giving Back: A Tribute to Generations of African American Philanthropists, creator of The Soul of Philanthropy exhibit, and co-founder of New Generation of African American Philanthropists, a giving circle in Charlotte, NC. Tracey Webb is noted as the first online chronicler of Black philanthropy as the creator of BlackGivesBack.com, a blog that ran 2007–2015, and the founder of Black Benefactors, a giving circle based in Washington, DC.

Saad&Shaw are co-sponsors of the Ocean City Jazz Festival July 4th through 7th in North Top Sail, NC. Join us there. Learn more at http://bit.ly/OceanCityJazz.

Are we without …Hope?