Sign up now for our free weekly email updates.  We’ll give you the good news from our community.
Urban Views
When they cut off the breath of one...
Staying at Home Has its own Risks
Practical Tips for Caregivers Facing a Pandemic
First Responders Behind The Wall
Helping veterans and active duty military cope with...
Home Featured Richmond Teacher Crowned National Teacher of the Year
FeaturedFeatured NewsNia Simone McLeod 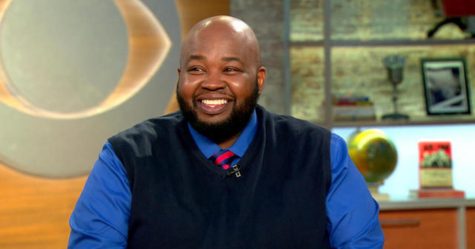 On Wednesday, April 24th, Richmond Public Schools’ Rodney Robinson was revealed as the 2019 National Teacher of the Year. Robinson was one of four finalists including Oklahoma’s Donna Gradel, Washington D.C.’s Kelly Harper, and Alaska’s Danielle Riha. The official announcement was made on CBS’s daily morning show CBS This Morning, where Robinson was featured on the live broadcast.

On the show, Robinson discussed the importance of maintaining equity in the classroom, “All kids deserve a great education, but not every kid is on the same level. As a teacher, you make sure each kid gets what he or she needs to achieve at a high level.”

Throughout the interview, Robinson discussed his experiences of teaching at Virgie Binford Education Center, a juvenile detention center in Richmond, Virginia, “They’ve made mistakes and they’re paying for these mistakes, but America is a country of second chances. In order for them to achieve and get that second chance they deserve a quality education like everybody else.”

He was inspired to become a teacher by his mother, who ran an in-home daycare, “She taught us that every child deserves the proper amount of love to get what he or she needs, and that was my first lesson in equity.”

He continued, discussing how he brought his mom’s lessons into his everyday teachings, “I try to teach my students whatever they need to be successful. Some need more, some need less, but I’ll be there to give you what you need.”

A graduate of Virginia State University, Robinson has spent 19 years teaching and has spent them all within the Richmond Public Schools system. He previously taught at Armstrong High School, George Wythe High School, and Lucille Brown Middle School, before coming to the Virgie Binford Education Center in 2015. He currently teaches history and social studies.

Prominent figures throughout Virginia have spoken highly of Robinson’s positive contribution to the Virginia community. Jason Kamras, the Superintendent of Richmond Public Schools, stated that there was “simply no one more deserving of this honor. Rodney represents everything we stand for at RPS: boundless love for his students, a fierce commitment to equity, and an unrelenting pursuit of excellence. We are beyond thrilled to have him represent the teachers of RPS, Virginia, and the entire United States over the next year.” Kamras was named National Teacher of the Year in 2005 and received the award from President George Bush.

Governor Ralph Northam congratulated Robinson on his title, “Rodney is a remarkable teacher and mentor to his students; Virginia is proud to see him receive this well-deserved recognition as National Teacher of the Year. He personifies the Commonwealth’s commitment to making sure that every student, no matter who they are or where they live, has access to the educational services and supports necessary to succeed in school and in life.”

Congressman A. Donald McEachin called Robinson “an inspiration to us all. The  passion he has brought to teaching throughout his career, particularly his focus on helping disadvantaged youth overcome their challenges to achieve their dreams, is exemplary.”

The award of National Teacher of the Year was started in 1952 by the Council of Chief State School Officers (CCSSO). The CCSSO is a nationwide non-profit organization that is committed to ensuring that all students through the United States public education system, regardless of background, receive a quality education. The National Teacher of the Year award focuses on highlighting excellence in teaching. Two Virginia teachers have previously taken this title: Alexandria’s Philip Bigler in 1998 and Hampton’s Mary V. Bicouvaris in 1989.

In an interview with NBC12, Robinson explained how he felt about his White House visit, “The White House was built by slaves and those are my ancestors. It was an honor to be there in their presence and spirit.”

As Teacher of the Year, Robinson will take a year off from his teaching duties to travel, both nationally and internationally, to advocate for issues within education and the teaching profession. Along with maintaining equity throughout the school system, Robinson wants to spend his year advocating for recruiting more men of color into the field of education.

Robinson hopes to elevate the voices of students throughout his year as Teacher of the Year, “This year, I hope to be the voice for my students and all students who feel unseen, unappreciated, and undervalued in America.”

According to the U.S. Department of Education, there’s a large diversity gap between teachers and their students in the United States. In the 2015-16 school year, more than 80% of the teachers were white. In the same school year, less than half of the students were white. Research has shown that the presence of black teachers has a positive effect on black students in a variety of different ways. For example, research from Johns Hopkins University has shown that black students are more likely to perform better on standardized tests and more likely to graduate from high school.

Black men, in particular, are severely underrepresented in the field of education. Studies have shown that black men only make up about two percent of the teachers in the United States. There are organizations throughout the United States that are dedicated to recruiting more black men into the field of education including the Future Minority Male Teachers of California, The Fellowship of Black Male Educators, and Call Me MISTER.

In Robinson’s speech to the American people, which was presented at the White House, he stated that he will advocate for the rights of all students regardless of race, ethnicity, sexual orientation, and religion. “I accept this award for the underdog in all of us, and I will work for all students to have the resources they deserve. I will continue to speak, fight, and advocate for all students and teachers because every student in America deserves a great education.”

Mother’s Day Around the World