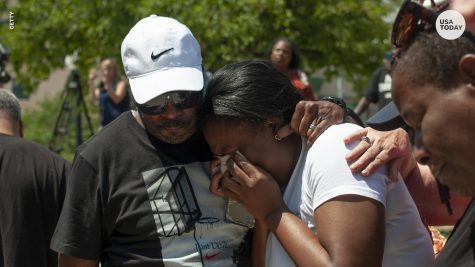 Once again the flags around the nation are at half-mast in the wake of two mass shootings within a 24-hour period in two American cities. The hash tag #thoughtsandprayers is trending on social media and feels even more impotent and trite than it has ever felt before. El Paso, Texas and Dayton, Ohio distinctly different cities, one in the southwest and the other in the northeast, now share the unspeakable horror of being American cities where mass shooting number 249 and 250 have occurred. These mass shootings killed 30 and wounded over 53 people and have shattered the peace and safety of both these American communities.

Once again, the shooters are young angry white males with access to assault weapons of war. In Dayton the shooter was shot and killed by police, and in El Paso the young man was taken into custody unharmed. Once again, Americans are wrestling with the question of why? Why did these two young white men feel compelled to target innocent civilians in these two cities? Why were they able to legally obtain military grade weapons designed to inflict massive impact and used during campaigns of war? Why are we asking the same questions for the 250th time in less than 216 days into the year 2019?

For some of the questions being asked there are some answers, however inadequate they may seem, and for other questions there seems to be absolutely no answers at all. This country in which we live has a domestic terrorism problem and although there has been no pronouncement on the Dayton shooter’s motives, in El Paso the shooter’s motives have been identified as unmitigated white nationalism. White nationalism is rooted in white supremacy and is embedded in the soil of the American cultural continuum.

White nationalism has only recently been openly discussed and reported by mainstream media outlets and by our political leaders across the nation.  However, black and brown people, Muslim and Jewish communities are historically familiar with the terror promoted by white nationalism, Islamaphobia, anti-Semitism and race hatred. Although it’s nothing new, it is abundantly clear that there has been a new tolerance cultivated for the current dispensation of white nationalism and anti-immigrant sentiment spawned by this current administration.

In the United States of America, there has been more death and carnage inflicted by Domestic Terrorism than by the so-called “radical” Islamic terrorism our government agencies identify as the boogiemen we should all be so horrified to encounter. And yet, let us be clear, the Domestic Terrorism referenced here is White Nationalism and young angry white males with access to high-powered assault weapons of WAR! White Nationalism is Terrorism plain and simple! This is NOT about mental illness! It’s not about violent video games! It’s NOT something that cannot be dealt with!

If the shooters were from the Middle East, if they were identified as Al Qaeda or Isis or some so-called radical Islamic terrorists, we would have had a WAR on TERRORISM already mobilized across the nation! Instead, because these perpetrators are homegrown white boys, there will be NO mobilization or organized attack on the problem. Excuses will continue to come from the White House because they are unwilling to attack a problem that they have been complicit in promoting.

The President and ALL of his enablers are responsible for where this nation now finds itself.

The American Carnage continues, and as long as our government refuses to attack White Supremacy and White Nationalism with the same fervor and systematic approach they have employed when attacking other radicalized individuals, terrorist networks, and jihadists, these mass shootings and massive killing sprees will continue and our nation will continue to live with the Traumatic consequences of this current Administration’s campaign of hatred, division and fear.