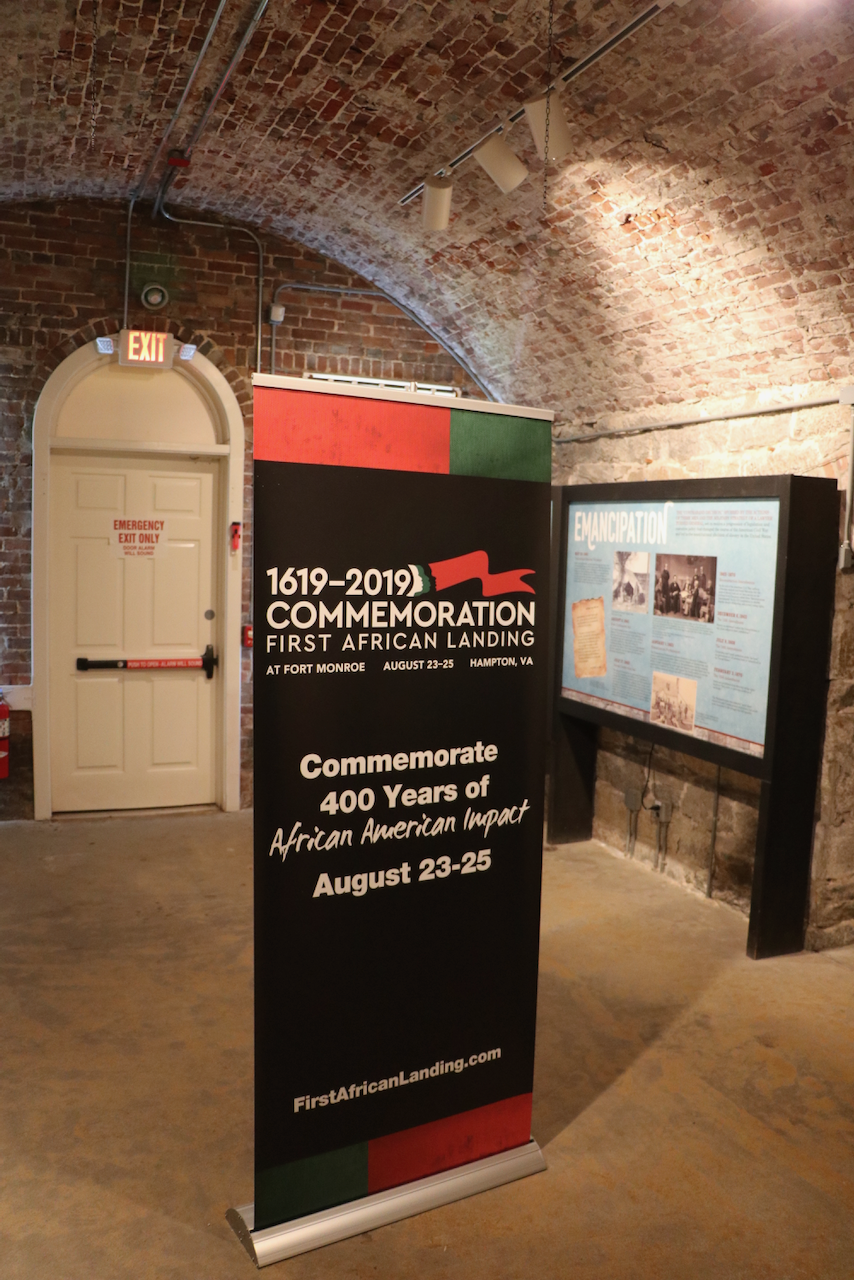 From August 23-25, 2019, Hampton, VA will host the 2019 Commemoration of the First African Landing with a weekend-long calendar of events.

The History of the First African Landing
Four hundred years ago, at least 20 Africans were brought to Point Comfort by English settlers. This is the first recorded arrival of Africans in English-occupied North America. The Africans, originally from Angola in West Central Africa, were first captured onto a Portuguese ship entitled the San Juan Bautista. During its journey, the Portuguese ship was attacked by two English ships, White Lion and the Treasurer, in the middle of the Gulf of Mexico. The English then brought the Africans to Point Comfort, otherwise known as present-day Hampton, Virginia.

Merchant John Rolfe recorded the event in 1619 reporting that “20 or so Negroes” arrived at Point Comfort during that August day. Even though Virginia didn’t have clear rules on slavery at this point, the Africans were then sold into bondage. This began the 400-year history of African Americans.

Four hundred years later, the 2019 Commemoration of the First African Landing will commemorate this event and recognize the many chapters of African American history, leading up to the present day. From Saturday’s Commemoration Concert featuring Common and Sounds of Blackness to a day of healing on Sunday, there are many different events for the public to enjoy. Below is a comprehensive list of events featured throughout Hampton during the weekend of August 23-25.

The luncheon will feature a wide variety of panelists including Former Virginia Governor L. Douglas Wilder, Virginia Congressman Bobby Scott, and Senator Mamie E. Locke. The discussion will include the panelists’ past experience in public office and their visions for the nation’s future. Tickets to the event are $50.

3. Take Me to the Water: Evolving Beyond Slavery

This sunrise event will honor the landing of the first Africans with spiritual cleansing and an African Naming Ceremony. The deadline to register for the African Naming ceremony has closed, but the public is invited to attend and witness this event, conducted by African Queen Mothers.

Directly after the Commemorative Ceremony, the park will feature a day of events commemorating the resilience and progression of African American history from the past, present, and future. This event will feature a variety of local and national exhibitors, children’s activities, musical performances, and spoken word. There will also be food and merchandise vendors available at the event. This event is open to the public.

Presented by Project 1619, this program showcases an afternoon of events informing, entertaining, and healing the public. This event features an appearance by Hampton Mayor Donnie Tuck and the founder of Project 1619, Calvin Pearson. Some of the events that are happening throughout the day are an African Naming Ceremony, a performance by the West African dance group KanKouran, and Black heritage tours.

This free concert features Grammy-award winners’ rapper and actor Common along with vocal ensemble Sounds of Blackness. In order to attend the concert, everyone must have a ticket. Currently, the concert is sold out.

To recognize the 400th anniversary of the first African landing, bells around the United States will ring for 4 minutes: one minute for every 100 years. This program invites public, near and far, to be a part of this journey. Commemorative bells will be given to the first 300 guests. The event will also feature a performance by the Elegba Folklore African Drummers and Dancers.

This program strives to reflect on the past 400 years of African American history and show appreciation to the past, present, and look forward to the future. The event will be emceed by Anita Blanton, WAVY-TV10 and Fox43 anchor. The program includes musical performances and a gospel concert, featuring the 4 Him Gospel Quartet, Damien Sneed, and the First Baptist Church Choir.

Back to FUNdraising School Special

“Go Fish! What’s the Right Catch for Your Heart?”