And the Children will lead…

“ You know it is time for change when the children become the leaders and the leaders become children.”  — Author unknown 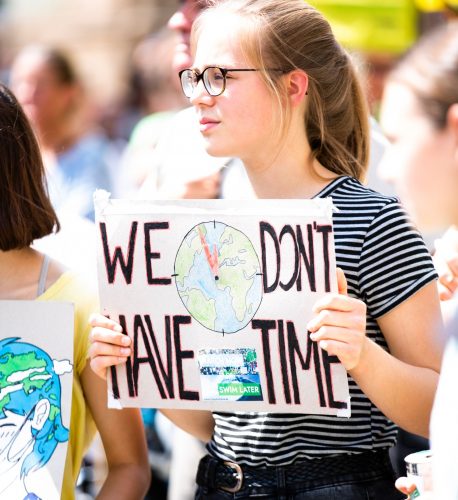 All over the world, the children and many adult supporters of Save Our Planet initiatives took to the streets, the highways and even open fields to shout out for the world to hear that climate change is REAL and it is threatening the future of our planet. Children and young people are creating a ground swell in the worldwide movement to address global warming and climate change as one of the most significant threats to life and liberty on the planet. They’re calling out the inept and tone-deaf inaction of our political leadership by shouting at the top of their lungs, “You’ve had your future now allow us to have ours!”

Within months after the one year anniversary of the March for Our Lives organized by the students of Majory Stoneman Douglas High School in Parkland, Florida that focused world-wide attention on gun violence and the inaction of political leadership to make any significant steps to address it, young people organized the largest global march ever, bringing attention to the urgent need to address global warming and the destruction of the planet as we know it. The children are demonstrating significant leadership with actual policy proposals while the adults are doing little to nothing except demonstrating that they are either too cowardly, willfully ignorant, or too self absorbed and self serving to notice what is actually happening in the world that they live in to DO anything about it! These young people are sick and tired of it and they’re NOT going to take it anymore!

In RVA, our students also joined the worldwide chorus to raise awareness for climate justice. They walked out of classes and held signs saying, “We want our hopes and dreams back.”  One of the youngest to speak out at the rally in Richmond was a Clover Hill Elementary student named Sophie. The message the protesters were in unanimous agreement about was the fear of a future that is predicting ecological disaster in as little as the next 11 years. Little Sophie stood behind a podium that she could barely see beyond, and told the crowd gathered there, “You will die of old age while we will die of climate change!”

The young people are beginning to realize that they have more to lose in this battle than the adults in power. It has become clear to them that if the current political leaders, many of whom still hold to the mindset that “global warming” and climate change are not a real phenomenon, have no inclination to address the coming disaster and remain entrenched in denial and ignorance, that the young activists have no other choice but to take to the streets.

These children are taking a page from the playbook of the Freedom Riders of the 1960s who were also bold and passionate young people who led the nation in the struggle for Civil Rights. The Freedom Fighters created a massive social change movement across the nation and brought worldwide attention to the injustice and inequality that permeated a nation that made its profession “Life, Liberty and Justice for ALL.”  Once again, the survival of our nation is dependent upon the fearless leadership of our children!

What makes a good fundraising program?