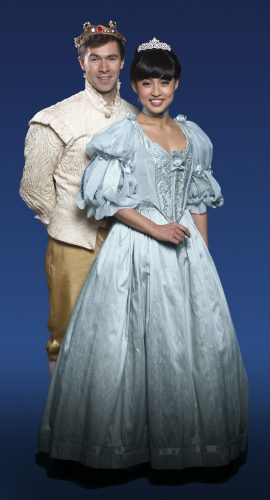 This holiday season will be filled with a different kind of music and magic in at least one Richmond stage production. For the first time, Virginia Repertory Theatre will stage the Broadway version of Rodger’s and Hammerstein’s Cinderella at its November Theatre, Marjorie Arenstein Stage. The play will run from Friday, November 29 through Sunday, January 5 with a single preview performance scheduled for Wednesday, November 27.

Laine Satterfield will direct this contemporary take on the classic tale based on the book by Douglas Carter Beane, and she believes it is perfect for the holiday season.

“One of the main themes is kindness,” Satterfield said in a recent phone interview. “I think that the idea of kindness is really at the heart of the season.”

The show’s Cinderella agrees. Quynh-My Luu shared by email that when she was cast in the role of Ella, she was not at all familiar with the 2013 Broadway version of the famous fairytale.

“I think the morals of this show – kindness, self-confidence – are so relevant within the modern political climate,” she wrote. “I think Cinderella is a very good, direct reminder that kindness is still very important.”

This Cinderella is something a little different, bringing a slight political slant and some fun new characters, but the show still features beloved tunes such as Ten Minutes Ago and In My Own Little Corner, as well as all the magic and romance you expect from the Cinderella story.

“It is still a tale about love, but Ella is not just looking for a man to save her,” Satterfield said. “For me, especially as a woman, this shows a Cinderella that is more empowered.”

This is one of the things Luu, a newcomer to Virginia Rep, found to relate to in the role. Ella is a dreamer trying to find a way to break the boundaries of what others say she can and cannot do. She starts out getting her power and confidence from outside herself, but by the end of the show she discovers she has it within.

“I have had the same discoveries in my own life,” Luu said. “I think that is something that a lot of people discover: that if you want something enough, you will find the agency in making it happen.”

Taking the stage with Luu as Prince Topher is another newcomer to Virginia Rep, Edward L. Simon. Like Luu, he also was not familiar with the Broadway version, or in fact any version of Cinderella.

“Once I was cast in the role, I decided not to watch any version out there,” Simon wrote in an email. “I wanted to stay as ignorant of any other people’s versions as I possibly could, to force myself to create something new and uniquely vulnerable.”

That vulnerability and trying to find his own way was something Simon found in common with the prince. As a young actor, he is just coming into his own as an artist, struggling to hone his craft and recognize his progress while at the same time doubting his own abilities and worth.

“That’s exactly where Topher is too,” Simon said. “He has the potential, the mind and motivation to literally alter the course of geopolitics and the socioeconomic structure of the world. But he also thinks, at times, he was put in this position by mistake.”

As Luu and Simon work through rehearsals and developing their characters, they are thankful for the warmth and friendship that has been shown to them by the entire company. They join a cast that includes Richmond favorites Susan Sanford (as Madame the Wicked Stepmother) and Katrinah Carol Lewis (as Marie the Fairy Godmother). Jay O. Millman, Havy Nguyen, Audra Honaker, Durron Tyre and Benjamin Lurye round out the principal cast.

They have also been helped by the collaborative nature of the team – something that will be needed to ensure that the on-stage transformation magic wows the audience at every performance.

“It is an amazing spectacle of a show and the audience members will definitely be visually amazed,” Luu said. “I know I am!”

Simon agrees, but adds that there is even more to the spectacle to be had.

“I think people should expect to see something that will make them reconsider the power of a singularly and uniquely human version of love, patience and listening. I think people should come because our version of this show initiates a necessary conversation about change that is becoming uncomfortable and antagonistic in most other settings.”

That is exactly what the director is aiming for – a show that is great for all ages because it has something for everyone.

“The themes in Cinderella,” Satterfield said, “love, doing right and following your dreams – they really show that everything is possible if you believe in yourself.”

For Ticket Information you can contact the box office: 804-282-2620 or visit them online at www.virginiarep.org

A sensory friendly performance will be offered at 10:30 a.m. on Tuesday, December 10. More details can be found at http://va-rep.org/sensory_friendly.html