Throughout Women’s History Month this March, Urban Views RVA is featuring Richmonders as they reflect on women who they admire or have made a difference in their lives. This week, Meldon D. Jenkins-Jones writes about two women who are her mentors and role models. 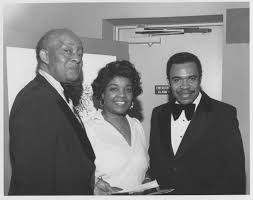 Larrie W. Stalks, a politician in Newark, New Jersey, was one of my mentors in the 1980s. In her obituary, those who knew her used the words trailblazer, inspiration, icon, leader, mentor, friend, and role model. I had the privilege of knowing Larrie’s husband, son, and one of her brothers, and I knew Larrie to be an intelligent, caring, and passionate wife, mother, sister, and community leader.

“Politics is everything!” Larrie once told me. I believe she was the first African American female Register of Deeds and Mortgages in Essex County, New Jersey. She was a prominent leader in the Essex County Democratic Party. I was a member of the Larrie Stalks Civic Association, which strove to educate members on the ins and outs of civic duty while fostering friendships across neighborhood, and even city, lines. Larrie did a lot to unite African Americans in Newark and Essex County, and she inspired hundreds of young women to be active in civic affairs and to build up their communities.

Also, my daughter, Meldon “Mel Jones” Stubbins is a special person to me, but having observed her with various groups of people, I know that she is very special to others, as well. I admire her perseverance, as well as her active Christian faith in which she uses to love and care for almost everyone she meets! Mel has been different since she was a girl.

An early reader, she loved books and libraries from a very young age. I admire Mel’s adventurous spirit. She has always been an independent thinker, and has never feared taking a job in a seemingly odd area of work. For instance, Mel has been a farmer, a salesperson, a grant writer, a digital marketing associate, and a missionary.

Now Mel is a freelance journalist and has written for The Atlantic, The Washington Monthly, and Richmond Magazine.com. Mel’s concern for others is reflected in her writing, which has been a consistent part of her life. In addition to her missionary work while in college, Mel is currently studying to be a Spiritual Guide at the RUAH School of Spiritual Guidance at Richmond Hill, and she is an active member of a local church. Mel is also studying how she can contribute to her neighbors’ well being at Leadership Metro Richmond (LMR)’s Leadership Quest Class of 2020.

Staying Home Can Take You Far