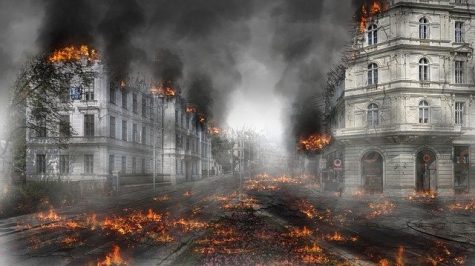 What are we fighting for in this country? Have we come to the place where we have to admit that the “great experiment” called the United States of America has actually been a dismal failure? What is the poison in the soul of the American psyche that has so infected our nation that we have arrived at what must be characterized as a deadly and deep chasm of division? A divide that exposes the truth that we are not One Nation but rather two distinctly different Americas. We are in the midst of a double pandemic, one that infects our physical bodies and the other that bankrupts the conscience of our nation and has branded its soul.  Where is the promise of the “American Dream”? Why has America so clearly failed in actualizing the core and fundamental proclamations that our forefathers laid as the very principles of democracy, freedom, and equal justice for ALL? History and context become extremely important when we begin to analyze these questions.

The Founding Fathers and their descendants came to the shores of America fleeing tyranny and oppression. They wanted freedom from authoritarian rule and the monarchy. However, when they established themselves here on this land, what they actually did was to re-establish a Kingdom for themselves. They took the lands from Indigenous Peoples, they captured and enslaved millions of Africans from the continent and transported them across the Middle Passage creating the Chattel Slavery enterprise. These two things in combination ultimately built the physical, economic and constitutional foundation of the United States of America. Then they created a Declaration of Independence that only included white people while excluding Native Peoples and enslaved African peoples as a part of the citizenry of their newly formed nation. So non-white people were never “SEEN” as citizens but rather “subjects” just like the white male founders had been subjects in Europe. This is the foundational TRUTH that has never changed as America continued her journey towards realizing her ultimate potential as the world’s greatest social experiment.

Now here we are in 2020. Over 400 years since the first enslaved African people arrived on the shores of Virginia. We are almost 160 years past the first shots fired in the Civil War where the South called it the “War of Northern Aggression” and a war to preserve “States Rights” while most people know that it was a war to maintain an economic system of free labor called Slavery. Now here we are because America has never fully embraced its Black citizens as Americans with all the rights and privileges of FULL Citizenship. Black Lives Do NOT Matter in America and that is the truth that must be faced by ALL of us living in America. Living in America as a Black person has never been to live fully without fear.

The social contract that most Americans agree to participate in and embrace as one that is mutually inclusive, has never been true for Black people in America. No matter what we do, how we live, how we protest, or not protest, we are not included in the system of Equal Justice under the Law. Whites in America, whether intentionally or unconsciously participate and protect a system of privileges that maintains a perception of supremacy while actively engaging in continuing to build and maintain a rulership over black bodies and black peoples. In 400 years of American History this has never been addressed in other than peripheral of piecemeal ways with basically cosmetic adjustments.

The institutional and systemic practice and policies of anti-Black racism have Never Been confronted in order to effect REAL and Systemic CHANGE. Race and racism continue to be weaponized against Black People in this country and until we face it, and acknowledge it, America will Never CHANGE. YES, AMERICA IS BURNING! It will burn again, unless and until America faces her History, acknowledges her failures and elevates her Black citizenry to Equal and Equitable participation in the process of democracy, freedom and justice. Then and only then will we be able to actually build a sustainable future for ALL Americans.