Urban Views
9-11 Never Forget
Richmond Region Economic Development and Business Leaders Respond...
Covid 19 Response: A Back to School guide
The Martin Agency Names Danny Robinson Chief Creative...
Home Improvement Guide
Home WritersBonnie Newman Davis When they cut off the breath of one of us, the rest of us must breathe bigger
Bonnie Newman DavisFeaturedFeatured News

When they cut off the breath of one of us, the rest of us must breathe bigger 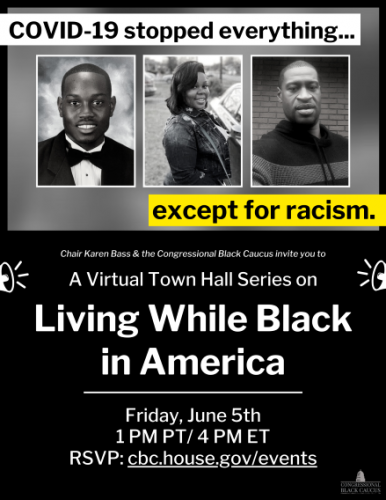 The Congressional Black Caucus will address the recent killings of African Americans during a town hall meeting on June 5.

May 31 marked the end of Mental Health Awareness Month, but something tells me that an extended stay is needed given the series of crises that continue to pummel the nation.

For many, the mental health imbalance began in March when America took steps to actively combat COVID-19, a deadly viral disease. Governing officials mandated that schools, churches, corporations and anything else not deemed “essential” be closed. Despite such orders, more than 105,000 Americans have lost their lives from COVID-19. On Memorial Day, The New York Times’ front page listed the names of 1,000 people who died from the disease.

The loss of more than 40 million jobs has compounded the loss of loved ones for many. Others, embittered by warnings not to gather in crowds, have ignored health officials’ advice to wear face masks, and appear emboldened by their own decisions to do as they please in public spaces.

So here we are in June, a month that was to provide a prescription for respite after weeks of sheltering at home. Some retails establishments and restaurants were scheduled to reopen and plans were underway for a return to “normalcy.”

Instead, June’s arrival delivered another dose of an insidious and lethal virus that refuses to die: racism. The latest act of overt racism against an unarmed black man came May 25 in Minneapolis when a white police officer kept his knee on the neck of George Floyd, for eight minutes. Floyd, who was handcuffed for suspected forgery, died a short while later after repeatedly gasping that he could not breathe. 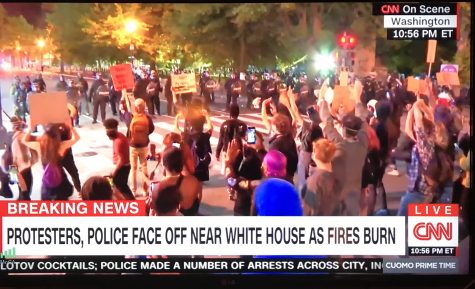 Floyd’s death, on Memorial Day, followed several violent killings suffered by African Americans at the hands of police this year. On March 13, Breonna Taylor, 26, was shot in her home in Louisville, Kentucky by police. Taylor, an Emergency Medical Technician, was asleep.

On Feb. 23, less than a month before Taylor’s murder, Ahmaud Arberry, an unarmed 25-year-old African-American man, was shot and killed by a white ex-policeman in Glynn County, Georgia while jogging. 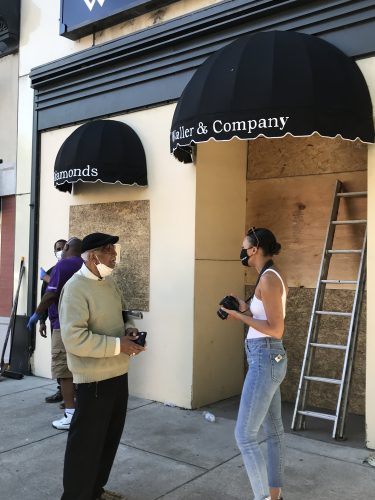 Richard Waller, Jr. describes to a passerby the recent damage to his family’s 120-year-old jewelry business after rioting occurred in downtown Richmond.

COVID’s death grip — then and now — can sneak up on you unexpectedly.  A cough, a chill, a fever, a sneeze, a kiss, a touch. Wear a mask, wash your hands and you’re safe.

The violent deaths of Taylor, Arberry and Floyd, while not uncommon, still have a way of catching us off guard.

As African Americans, these three citizens were accustomed to wearing masks, albeit not the ones prescribed by COVID.

Their invisible masks were similar to what Paul Laurence Dunbar’s eloquent poetry described decades ago:

“We wear the mask that grins and lies,

It hides our cheeks and shades our eyes,—

This debt we pay to human guile;

With torn and bleeding hearts we smile,

And mouth with myriad subtleties.” 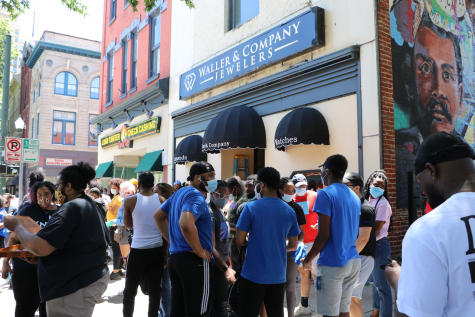 Masked or unmasked, the difficulty of dealing with so much tragedy, violence, death and despair, coupled with job layoffs, school closings, food insecurity and homelessness, can be overwhelming. I’ve had numerous people tell me how hard it is to absorb so much in such a short span of time.

Even hard-nosed journalists acknowledge being shaken by recent events.

“Journalists report news. But we’re also people,” wrote USA Today Editor-In-Chief Nicole Carroll in the newspaper’s May 29 edition. “And many times what we cover and how we live intersect, often painfully. This happened with the Asian American community facing hostility and racism over the coronavirus. Now is another of those times, especially for black journalists.”

Similar sentiment was expressed on social media by a veteran North Carolina television news reporter who once worked in Richmond. The newscaster noted that it was part of her training to report the facts and not convey her personal thoughts about certain news stories. However, she wrote that she was unable to contain her tears after reading back-to-back stories about the deaths of Taylor, Arbery and Floyd. 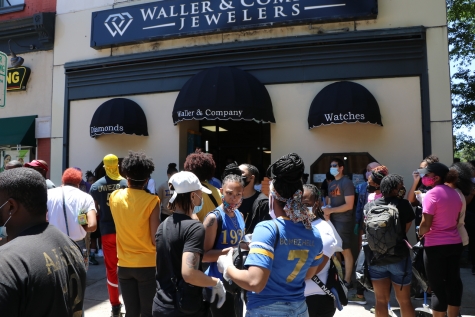 As for me, my usual coping strategies –cooking, gardening, walking and writing —lately have been preempted by watching or reading the news. Despite the years that I’ve spent writing about trauma and tragedy, I realize that consuming so much anger, grief and pain can be stressful and counterproductive.

Thus, last Friday, I was grateful to receive an uplifting message and invitation to join a May 31 “breathing” session from Tamara Jeffries, my virtual yoga instructor. In the invitation was a reminder that June is National Yoga Month, a timely extension of May’s mental health focus as we continue to deal with unrestrained societal and personal issues.

“We are grieving and angry and afraid and despairing and depressed and fired up,” said Jeffries, a former executive editor of Essence magazine and an associate professor of journalism and media studies at Bennett College. “These are right feelings. But while we are burning down these heinous symbols and systems of oppression, we ourselves cannot go down in flames.” 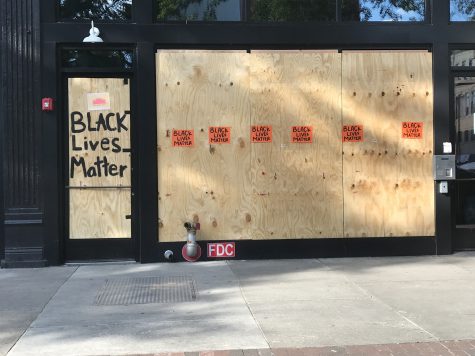 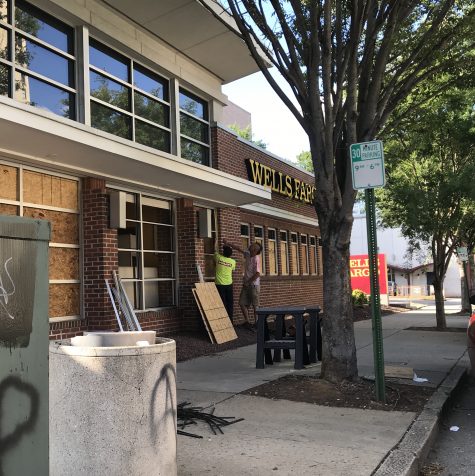 Jeffries, a recipient of the Rosalyn Carter Fellowship for Mental Health Journalism and an Association of Health Care Journalists/National Library of Medicine Fellow, believes that “when every effort seems to be directed at our demise, the most radical thing we can do is insist on living. When they cut off the breath of one of us, the rest of us must breathe bigger.”

Jeffries, whose recent session took place after my deadline for this column, encourages her yoga students and followers to find safe spaces, give time and space to their bodies, ideas and feelings in order to “move, rest, open our hearts and breathe.”

We all would do well to follow Jeffries’ advice to trust, believe and breathe.

Good article Soror. Your sister Noelle is my little sister and shared your article with me.
Back in the day, we used to say, ” RIGHT ON!”, and today… and in your case. I am saying it still, WRITE ON! Keep on being right on and write on!
Wishing you all the best.