The Myth of the “one bad apple” 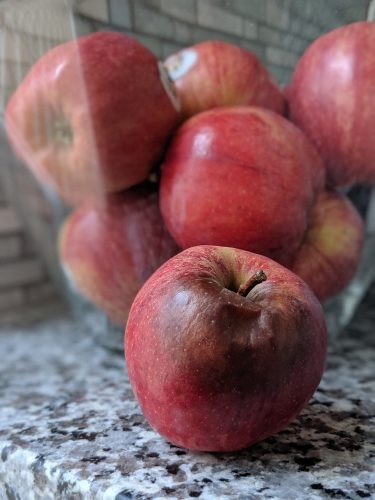 You’ve heard the expression, “If you’ve got one, you’ve got a lot more?” Usually it’s referring to infestations of insects or rodents, but the point is that they do not travel alone, they are not singular, they naturally travel in packs, herds, colonies, nests, hordes and so on. There is never just one.

There’s another expression that says, “The apple doesn’t fall too far from the tree.” Which makes perfect sense because the apple grows directly from the vascular system, the root system of the tree itself. It’s not possible for it to be separate. In fact, the very existence of the apple, whether it is “good” or “bad” is dependent upon having been or currently being a part of the tree from which it comes.

Recently, we’ve been offered “a few bad apples” as a defense of the blatant display of police brutality, assault, and the use of excessive force aimed at Black people to the point of death. To be clear this is not a “new” phenomenon. However, in the past 5 months there have been not less than 5 high profile murders of unarmed Black people in various places doing everything from sleeping in their bed, to jogging down the street, to sleeping in a vehicle in the drive thru lane of a fast food restaurant because he was intoxicated, to a dispute over a counterfeit twenty dollar bill.

All of the above examples ended with the premature deaths of these unarmed Black citizens after they were harassed, tortured, stalked and terrorized mostly by the people sworn to protect and serve them and their community. We witnessed over and over again the public lynching of these aforementioned black bodies on the evening news and oftentimes the actual act itself broadcasted in REAL Time all over public television and social media for the entire world to see.

If the Criminal Justice System is broken, and Policing in America is infected at its very foundation, no amount of “reform” or “training” is going to fix the systemic and institutionalized policies and procedures that undergird its racist and white supremacist origins. To say that the system is broken is to assume that the intention of the system itself is to be a help to the community and not a hinderance. One must believe that the police are indeed public servants who are only there to protect the “public safety.” In America, however, there is a very different and distinct experience and relationship that Black, Indigenous and other communities of color have with local, state and federal police.

Black communities, in particular, have long recognized the historic implications of policing our communities. We know that the origins of policing come directly from the slave patrols which deputized groups of white men to protect and control the “property” of other white men. Enslaved Africans were terrorized,  hunted, and brutalized by these patrollers who were sanctioned by local, state and federal government systems. So, given the original design of the system of policing in America, the system is not broken but, in fact, is functioning just as it was historically designed to do. Black bodies have never been considered as fully free and autonomous within the American cultural continuum. Black people have been fighting to be recognized as full human beings and to be fully included as citizens in this country for over 400 years.

The system has evolved with the passage of time and there have been steps made with new legislation like the 13th and 14th Amendments but it has never been transformed into the model of “Equal Justice Under the Law” because its origins cannot be ignored. The 13th Amendment, which abolishes involuntary servitude has a HUGE loophole that negates the entire amendment on its face, when it allows for the exception of “when a crime is committed.”  When Black bodies have always been historically criminalized by virtue of our blackness, there is no abolishment of

involuntary servitude. In fact, the system of Mass Incarceration bears this truth out.

The goal and function of policing continues to be domination and control of Black bodies and State sanctioned terrorism of Black people. We cannot fix or “reform” the system as it stands. It will take a radical reimaging of public safety and policing in America for substantive CHANGE to happen.

There’s no such thing as “one bad apple” or even a few bad apples. It’s the tree and the root that MUST be addressed.