Removal of Statues is NOT Enough 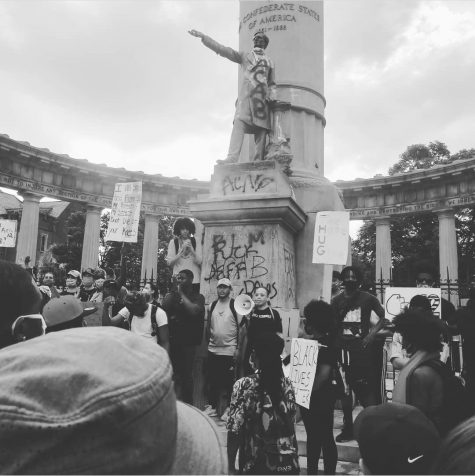 The world-wide removal of statues and monuments to The Lost Cause of the Confederacy and the glorification of White Supremacy is both historic and long overdue. The controversy as to whether or not these relics of racial terrorism and memorials to a Civil War fought to preserve the right to own enslaved Africans within the institution of Chattel Slavery should be saved as a part of historic remembrance seems to be over. The critical discourse and dissent will continue of course, but the plans for removal and the actual removal of these statues has been in full swing for several weeks now all over the United States and throughout the world.

The significance of the overwhelming acknowledgement that these monuments and statues may indeed be historic artifacts, and if preserved as such, they belong within a museum collection and not displayed within the public square is a seismic shift in the consciousness of the people within the United States of America and the  global community. The impact of these removals cannot be minimized nor should the collective efforts of the grassroots movement to make it happen be under appreciated. This is especially true of the increasingly powerful leadership of the Black Lives Matter Movement. Monument Avenue in Richmond, Virginia will Never be the same. And this is a huge step forward towards the movement for social justice and social change.

However true the giant step forward is for all of us here in RVA, it is quite simply NOT enough. In Richmond, we have been talking about these statues and monuments for far too long. We have been debating, convening and discussing these “cosmetic changes” to the historic avenue on which they stand with much more attention and fervor than we have given to discourse around the institutional policies, practices and procedures that function to keep in place the systemic racism that the statues and monuments represent. It may be true that the effect of dismantling these concrete symbols of racial inequality and terrorism paves the way to address the actual institutional and systemic practices within our government, educational, financial, judicial, and social systems, only time will tell. What we do next will be indicative of whether or not our consciousness and commitment to substantive change is real or imagined.

Are we going to buy into the “magical thinking” that believes that removal of a statue or monument will result in the fundamental changes we need within our institutions because we no longer have the monuments to remind us of the bygone days of yesteryear? Are we going to be satisfied by a superficial and cosmetic fix to the historic inequities and systemic and institutional racism that has infected our nation since its founding? That would certainly be the easy way out. And that is certainly the tendency of many people who often get into the “struggle” for the gratification of the moment instead of the long and arduous task of engagement. The accomplishment of removing a few statues is merely a symbolic gesture. If we are not willing to get busy with the real struggle for justice, equality and freedom then the removal of Stonewall Jackson, Robert E. Lee and all of the others will have been in vain. It will have been merely an exercise of rebellion and NOT change.

Now the REAL Work begins! We must begin the WORK to dismantle the systems of racism that have built the United States of America, and it will take a great deal of focused and intentional effort by all of us. The beginning of that journey is for each and every person to address the TRUTH of American History instead of the incomplete and disingenuous history we have been taught. We must hold our elected government officials accountable. We must demand change and be willing to PUSH for that change. Taking down the statues and changing the names on buildings and sports teams is NOT enough. Unless we make new Statutes and Laws, taking down the memorials to racism will do nothing but maintain the status quo and, in the end, the removals will have accomplished little.

Nonprofits, what is your business?