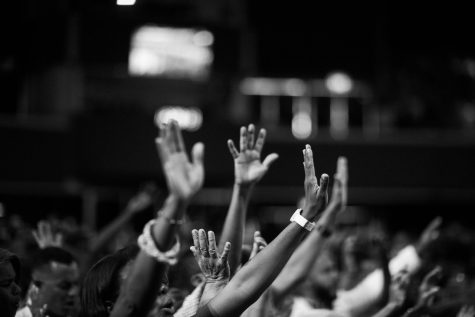 The old saying that the most segregated hour in America is Sunday morning in the Christian Church has never been truer than it is today. As a nation we are in the middle of a global pandemic that is killing hundreds of thousands of people, making millions sick, and the so-called “greatest country” in the world is falling woefully short in addressing it. The United States has the highest numbers of dead and dying with no end in sight. To this point South Korea, who identified their first case of COVID-19 at the same time we did in the U.S. has had only 14,389 confirmed cases and only 301 deaths. These numbers are a fraction of the numbers we are dealing with here in the USA with over 4.5 million confirmed cases and over 155,000 people dead. We are not winning this war. We are losing on every level as people have lost their jobs, their homes, and their security with unemployment rates continuing to rise beyond the numbers of the Great Depression.

At the same time, America is immersed in a national time of reckoning with our historic legacy of racial and social injustice, white supremacy and institutional racism. As the old folks say, “The chickens have come home to roost.” After the public murder of George Floyd by a former Minneapolis police officer, the unaddressed murder of Ahmaud Arbery by a vigilante white mob, the errant no-knock warrant by the Louisville, KY police department resulting in Breonna Taylor being shot 8 times and murdered in her bed, and the subsequent murder of Rayshard Brooks, who was shot in the back while fleeing the Atlanta police, Americans flooded the streets all over the nation demanding Change.

The outcry went global when millions of people all over the world began to shout that Black Lives Matter! And the protests continue to this day. These protests have been multi-generational, multi-racial and have involved people of all classes, genders and sexual identities, varied political affiliations, ethnic backgrounds and national origins. And with all of this outcry and righteous indignation exhibited on a global scale, the White Evangelical Church remains silent.

For White Evangelicals, there is an historic and foundational attachment to white supremacy, white patriarchy, paternalism, and the white savior syndrome that permeates the structure and leadership of their church. In recent times, they have uniformly attached their carriage to “Trumpism” and have given over any semblance of the former “traditions of conservatism” that had previously been the flagship and principle of the Republican Party. The salvation of the “white supremacist battle cry” and all that it stands for has so paralyzed this Church and once powerful movement, with its proclamations of standard bearing for “Christian Values” and the “Moral Majority” in America, that they have lost all credibility and are wandering in the wilderness preaching a Gospel that they have trouble demonstrating in any clear or consistent way. They have become hypocrites in the ways in which they silently stand by as racial injustice continues to be demonstrated throughout the institutions and systems in America. They feign ignorance or disbelief as they continue to stand by, saying nothing and doing nothing, watching as Black bodies continue to be murdered in the streets and LIVE on Facebook by the very law enforcement officers that are sworn to protect and serve the communities that they are terrorizing.

White Evangelicals in the Church are the modern-day Pharisees and Sadducees that caused Jesus to turn over the tables of the moneychangers in the Temple, calling them “A den of thieves!”  Swearing on the Bible has lost its impact when those that claim to believe that it is God’s Word have given over to silence and compliance. When the CHURCH is NOT doing the Work of feeding

the poor, taking care of the widows and the orphans, caring for the sick and remembering those in prison as if they were in prison with them, they demonstrate a defiled gospel and a self-centered adherence to their white privilege and comfort.

The Church is Not adhering to the gospel of giving hope to the hopeless, when the Bible says, “Give to everyone who asks you, and if anyone takes what belongs to you, do not demand it back,” Luke 6:30. That’s the Work that the Church should be doing right now. The White evangelical Church has a tremendous debt to pay as this nation grapples with it racist legacy and it MUST be stated for the record, that your silence will not save you.