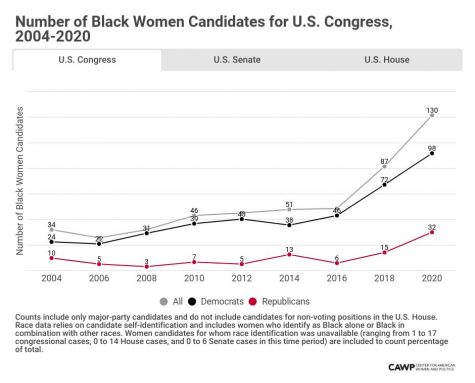 Higher Heights Leadership Fund and the Center for American Women and Politics (CAWP) at Rutgers University released an analysis of CAWP data on the 2020 election. That data shows that a record number of Black women are running for congressional office in 2020.

With primaries to be held in 14 more states, 44 (35D, 9R) Black women have already won major-party nominations for the U.S. House. This number of Black women House nominees is already greater than the previous high (40), which was set in 2018.

“In 2020 we are seeing another year of historic developments, coming after a record number of Black women running for office in 2018. We already knew that the road to the White House and the road to 2020 would be powered Black women – but this data shows that Black women candidates are stepping off the sidelines as viable candidates with the voter support. Black women are converting electoral power into political power, “said Glynda Carr, President and CEO of Higher Heights. “Black women are a powerful force in the American political system, and their political power at the polls and on the ballot, continues to grow and is increasingly recognized as an electoral game changer. When Black women run for office, they not only challenge biased views of who can or should lead, but also disrupt perceptions of electability.”

This can be evidenced by this primary season and the opportunities for Black women to make history down-ballot this year. Black women are already major-party House nominees in seven of the 31 states that have still never sent a Black woman to Congress, including Arkansas, Kansas, Mississippi, Missouri, Oklahoma, Pennsylvania, and South Carolina.

In just one example, Cori Bush upset a veteran congressman to make it on the ballot this November in Missouri’s 1st congressional district. Winning this seat will make her the first Black woman to represent the state of Missouri in Congress.

While these are positive gains, research shows that Black women still remain underrepresented in the full candidate pools for U.S. House and U.S. Senate. As our most recent joint report on the status of Black women in American politics shows, they are also underrepresented among officeholders.

Recent U.S. Census estimates note that women who identify as Black alone or in combination with other races represent about 7.6% of the U.S. population. In 2020, women in this group are 5.8% of all major-party candidates for the U.S. House. Black women are better represented among Democratic (9.4%) than Republican (2.6%) House candidates this year. Black women are 5.2% of all major-party U.S. Senate candidates in 2020. As in House contests, they are better represented among Democrats (7.5%) than Republicans (3%).

“2018 was an historic year for all women running for office, including Black women, and we’re seeing continued momentum in 2020,” said Kelly Dittmar, Director of Research at CAWP. “But there remain persistent hurdles on Black women’s paths to elected office. Translating record numbers of candidacies into greater representation among officeholders requires a concerted effort to remove any hurdles that make it harder for Black women to find electoral success.”

See the full analysis of Black women candidates in 2020 here.